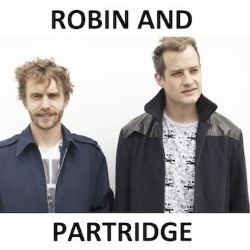 Robin and Partridge perform a comedy show about Robin's imminent death. In five years they have performed at over 40 festivals, introducing main stages, hosting mud wrestling, and organising an impromptu stag party for Jarvis Cocker. On YouTube they have over 49,000 views, have appeared on BBC Three, BBC 6 Music and were described by Grazia's Cultural Top Ten as 'cult festival favourites'. Three times featured in Sunday Times Style, once in Vogue. 'Surreal and rambunctious' said the Telegraph. Recommended by Time Out.

Sketch comedians and Rebel Bingo hosts, Robin and Partridge (as seen on BBC Three and heard on BBC 6music) return to the Edinburgh Fringe Festival with their best ever show. Then Robin dies at the end of the show.

Packed full of high energy sketches, politics, nonsense, Death, hilarious awkwardness and world changing poetry from Justice Radiator - you'd be hard pushed to find a more eclectic and joyous way to spend an hour at the Fringe. But don't forget, Robin dies at the end of the show.

Robin & Partridge have already been seen by over 87,000 people across the UK's biggest festivals and will perform at Glastonbury, Bestival, Lovebox and the main stage at Secret Garden Party this summer. Following a good hosing down, they also host a variety of parties for the Bethnal Green Working Men's Club and The Last Tuesday Society as well as internationally adored club night Rebel Bingo, which has fans in London, New York, Vegas and Rio. Following the critical success of their Edinburgh Festival debut Worlds Collide in 2011, the duo were commissioned to write a series of shorts for BBC Three Online and BBC Comedy. These sketches, as well as those on their own YouTube Channel, total over 49,000 views.

Robin and Partridge also work closely with children's arts and education charity, The House of Fairy Tales and have appeared alongside Jarvis Cocker doing improvised stories on BBC Radio 6. Their success amongst a younger audience paved the way for their ground-breaking residency at the Tate Britain, performing for families and teenagers. This led to further museum based shenanigans at The V&A, The British Museum and The Tate Modern. The have also hosted and performed in shows for over 30 brands including Converse, Nickelodeon, Eurostar, Playstation and The Brit Awards. This year they are due to officiate their second wedding ceremony.