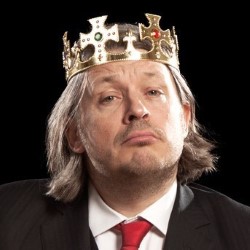 After covering weighty issues like death, love, religion and spam javelins, 'The King of Edinburgh' (List) is in a frivolous mood with this show about daftness, whether the term cool comedian is an oxymoron, bouncing joyously on the sofa and how Herring's whole career is a failed attempt to top a piece of visual slapstick comedy he came up with at 16. Can he revisit the joke thirty years on or will it smash his old bones? 'Dependably funny' (Chortle.co.uk). 'A new Richard Herring show is a never-ending cause for delight' (List).

DANCE, DANCE, WHEREVER YOU MAY BE
FOR I AM THE LORD OF THE DANCE SETTEE...

Have you ever....
- considered the amazing power of the sombrero to eradicate all sadness?
- noticed the terrible curse of the UK's oldest person? (whoever receives this poisoned chalice is always dead within months)
- become disillusioned with organised religion when you realise a childhood mishearing of a hymn means Jesus isn't anywhere near as much fun as you thought?

Lord of the Dance Settee is Richard Herring's eleventh different stand-up show in eleven consecutive Edinburgh Fringes. Having sorted out politics (Hitler Moustache), religion (Christ on a Bike), love (What is Love, Anyway?), death (We're All Going to Die!) and spam-javelins (Talking Cock), he is in frivolous mood with a show about daftness, being uncool and bouncing joyously on a sofa.

Richard Herring has performed at nearly every Edinburgh Festival Fringe since 1987. In the 1990s he was in a double act with Stewart Lee (whatever happened to him?) in BBC2 cult classics Fist of Fun and This Morning with Richard Not Judy. More recently he has created a raft of Sony and Chortle Award winning podcasts like Richard Herring's Leicester Square Theatre Podcast, As It Occurs To Me and Me1 Vs Me2 Snooker. You might have read his weekly column in the Metro, heard him on Just a Minute on BBC Radio 4 or seen him on a panel show being repeated on Dave.

Richard has also written a play for this year's Fringe called I Killed Rasputin (3.35pm at George Square Theatre).

IT'S HARD TO DANCE WITH THE DEVIL ON YOUR BACK
But why not try and buck him off like you're at a rodeo? It's just as much fun.