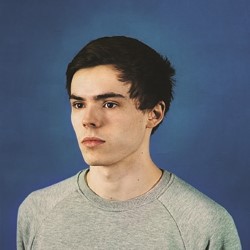 Pointy debutant Rhys James will tell some brilliant jokes, do some incredible poems, raise his eyebrows a few times and then leave. The whole thing will last around an hour, during which he won't check Twitter once. 'Sickeningly talented young stand-up. He's a super-sharp writer, with a ton of smart, intricately-written jokes and stories where you're never more than a few seconds away from another punchline' (Time Out). 'His hit-rate is prodigiously high... A bright future in comedy surely awaits' (Fest). ***** (ThreeWeeks). The Telegraph's 18th Funniest Person on Twitter. 18th. That's top 20.

It is now time for newcomer Rhys to begin his adult life, although he's clearly not ready to. Professional past-dweller Rhys James presents poems and stories of lost love, humiliating adolescence, and a pretty vehement defence of online dating. Plus, he's only got one kidney, so he'll probably bang on about that for a bit. This show is an hour of stand-up and spoken word poetry from one of the skinnier members of the worst generation in history.

Rhys made his Edinburgh debut in 2010 performing as part of the prestigious Pleasance Comedy Reserve, before returning in 2012 as part of AAA Stand-Up. He has since gone on to perform at a variety of festivals including Leicester, Glasgow and Latitude, and has written for Russell Howard's Good News (BBC Three), Mock The Week (BBC2) and 8 Out of 10 Cats (C4).

Known for his sharp and amusing tweets, Rhys was recently named as one of the Funniest People To Follow on Twitter by both The Telegraph and The Gentleman's Journal. He also has a strong following on YouTube for his unique comedic poetry and wry sketches. His 2013 Edinburgh show, Rhys James Prepares, was voted as one of Time Out's best Ten Free Shows at the Festival and was hailed on Twitter as an 'Edinburgh must see' by the likes of Bob Mortimer. This year, Rhys will appear on BBC Three's Sweat The Small Stuff and London Live's Funny Rotten Scoundrels. He also starred as one of the lead roles in sit.com, a C4 pilot written and directed by David Baddiel.