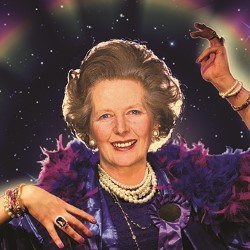 She's back! Britain's first female prime minister stars in a drag comedy musical extravaganza like no other! On the eve of the vote for Section 28, Maggie gets lost in Soho and accidentally becomes a cabaret superstar, but will she change her mind about the homophobic bill before it's too late? A camp odyssey about gay rights, the 80s and disco! 'Glorious camp with political punch' **** (Times). 'Funny, glamorous and horrifying' (Arthur Smith). ***** 'Comic perfection' (SoSoGay.co.uk). 'Absolutely outrageous' ***** (Everything-Theatre.co.uk). 'Less than respectful' (Telegraph). 'I await the West End transfer?' (Stage).

She's back! Britain's first female Prime Minister stars in a drag comedy musical extravaganza like no other! On the eve of the vote for Section 28, Maggie gets lost in Soho and accidentally becomes a cabaret superstar, but will she change her mind about the homophobic bill before it's too late...?

Off the Kerb Productions in association with Áine Flanagan Productions and Theatre503 are pleased to announce the multi-award winning joyous romp, Margaret Thatcher Queen Of Soho, will be heading to the Edinburgh Fringe Festival 2014 for its highly anticipated debut Fringe run. The smash hit show can be seen from 31st July - 24th August at the Assembly George Square Gardens, Bosco at 9:10pm.

Performer and co-writer, Matt Tedford ('the best Mrs Thatcher since Spitting Image's Steve Nallon' - Arthur Smith), is pulling on the tights once more after huge acclaim from the ThatcherWrite festival and a full run at Theatre503 (Battersea, London) last year, to give audiences an 'Glorious camp with political punch' (Times) insight into the difference an individual could have made with a sideswipe at homophobia and censorship.

Co-written and directed by Jon Brittain, this delightful odyssey about gay rights, the 80's and disco has received critical acclaim and achieved rave reviews across the board. Since the Margaret Thatcher: Queen Of Soho's debut just under 12 months ago, the show has won both the Brighton Argus Angel for Artistic Excellence (Brighton Fringe) and Micheál Mac Liammóir Award for Best Male Performance (Dublin International Gay Theatre Festival) for Matt Tedford plus has been nominated for the Most Promising Playwright (Off West End Awards).

Jon Brittain is a playwright, comedy writer, director and one of the 503Five. His work for theatre includes Phillipa and Will are Now in a Relationship and The Sexual Awakening of Peter Mayo, he co-wrote a dozen episodes of Cartoon Network's BAFTA and Emmy award winning show The Amazing World of Gumball, and he directed comedian John Kearns' Fosters Newcomer winning show Sight Gags for Perverts.

Matt Tedford is an actor and writer. He studied Drama at the University of East Anglia where he performed in plays such as Alfie, Angels in America, Faust and a regional tour of Noel Coward's Private Lives. Since then he has written, starred in, received an Offie nomination and won the award for Best Male Performance at the Dublin International Gay Theatre Festival for Margaret Thatcher: Queen Of Soho. He is not a member of the actors' studio.

Áine Flanagan Productions is an independent production company run by Áine Flanagan, an Irish freelance producer, art director and marketing manager. After touring both Ireland and the United Kingdom for several years as a Company and Stage manager, Áine moved to London and took part in Theatre503's resident Assistant Producer programme before going on to assistant produce and production manage numerous productions for the venue.

Theatre503 is the award-winning home of groundbreaking new writing. Led by Artistic Director Paul Robinson, Theatre503 is a flagship fringe venue committed to producing new work that is game-changing, relevant, surprising, mischievous, visually thrilling and theatrical. Our theatre is one of London's few destinations for new writing and we offer more opportunities to new writers than any theatre in the country. 'Arguably the most important theatre in Britain today' (Guardian).