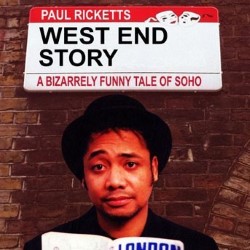 The award-winning comic's libellously funny story-telling show on how to find outrageous nightly adventure on a budget of £5. Set in the shady underworld of 1990's Soho, London, it’s a storytelling show about storytelling – using it as a way to get a social life. Creating scenarios in illegal drinking-dens beneath sex shops. Realising that the bigger the story you tell, the more people – such as international music legends and Tony Blair - want to believe it.

West End Story also claims to be the earliest previewed show in Edinburgh Fringe history! In August 2011 Paul did a single unadvertised preview performance at the PBH Free Fringe venue, The Canon’s Gate. Amazingly it was nominated for Best Free Show, Best Comedy Performance and Best Moment in the Edinburgh DARKCHAT awards – it didn’t win in any of these categories!

Paul Ricketts is an award-winning comic who since 2006 has been entertaining audiences across the UK and beyond. Since starting as an MC in his own London Comedy Club, Paul has developed into a much sought after performer on the comedy circuit - Comedy Store, Jongleurs, Highlight, The Stand (Edinburgh, Glasgow & Newcastle), The Glee Comedy Clubs, Frog & Bucket, Manchester, Off The Kerb and Up The Creek, London. Paul is also involved with Stand-Up For Labour fundraising comedy nights where he’s performed all over the UK with Arthur Smith, Norman Lovett, Hal Cruttenden, Arnold Brown, Steve Gribbin, Patrick Monahan, Vladimir Mctavish, Shappi Khorsandi, Sara Pascoe, Kate Smurthwaite, Andi Osho, Imran Yusuf, John Moloney, Adam Bloom as well as Ken Livingstone, Dennis Healy and Neil Kinnock. So Paul was wonderfully surprised to be voted runner-up in the Stand Up For Labour Act of 2013 award. Paul’s comedy is at times silly, serious or surreal, at others autobiographical, political or near the knuckle - but always funny!

Paul’s 2009 Edinburgh show Cutter’s Choice, a political and personal look at black hairstyles went on to tour London schools as well as being performed at The Hen & Chickens Theatre, Theatro Technis, Tristan Bates Theatre in London, Leicester and Brighton Fringe Festivals - winning the Fringe Guru Editor's Choice Award 2010. His next Edinburgh show Kiss The Badge, Fly The Flag! dealt with football and identity, received the 'Must See' award from The Stage, five stars from Remotegoat.co.uk and four stars from Three Weeks. This show was performed at Cambridge University's 'Festival of Ideas' and a revised version did a short run at the Leicester Square Theatre. His last show Ironic Infinity, a straight stand-up show was also very well received, gaining 4 stars from Chortle and Broadway Baby.