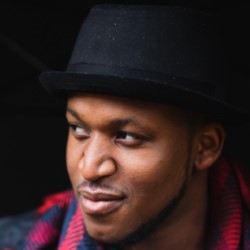 I'll never trust a woman who carries Imodium in her purse. Ola explains why in his first hour show, whilst recounting his search for a wife. 'An infectiously playful spirit' (Chortle.co.uk). As seen on Comedy Central, BBC Radio 4, London Live, MTV Base and ITV4.

Breakthrough star, Ola, takes his first solo hour to the Edinburgh Fringe Festival this year. With his unique comedic voice, Ola has been blowing audiences away at comedy clubs all over the country, including London's famous Comedy Store; combining a trademark cool delivery with clever, sometimes cheeky, intricate material.

Ola dreams of two things, finding his wife and becoming one of the greatest comedians who ever lived. In The Comedian and His Future Wife, Ola, the comedian, performs in America, recovers from a terrible show, and rejects a Black Comedy Award. In search of his future wife, Ola recovers from being cheated on, dates an American and rejects the idea of a woman who carries Immodium in her purse. If Ola can just find a wife and become one of the greatest comedians who ever lived, he can break his vow of celibacy and escape the label "urban".

The show centres on Ola's ebook, Dear Future Wife, a time capsule letter written in 2012, to his future wife.

Ola, a regular on the UK comedy circuit, has appeared on Comedy Central's The Comedy Store, MTV Base and on ITV4's Stand-Up Hero. He has performed as far afield as the USA, Dubai and all over Europe. Ola has also made a name for himself as a writer on BBC Radio 4 shows including Can't Tell Nathan Caton Nothing, The News Quiz and The Now Show.