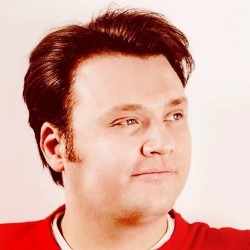 For over 30 years, Nathaniel Metcalfe lived in North London. Last year, however, a momentous change occurred in his life. He moved to a completely different part of the world: South London. Can things really be so different now?

Returning for his second solo show at the Fringe, Nathaniel investigates the nature of stardom from The Beatles to The Honey Monster via Ian Beale, and gives his observations on the peculiarities of everyday life in his warm, serene and self-effacing manner. Expect a bit of clever wordplay too, and a love of the intricacies of modern life and language delivered without the whistles and bells.

After starting a stand-up career in 2007 and doing a mere five gigs, Metcalfe got through to the semi-finals of So You Think You're Funny. In 2010 he reached the semis of the Laughing Horse New Act Of The Year and the final of the Hackney New Act Of The Year, and in 2013 took his debut show Enthusiast to the Fringe - where it was named one of the top ten shows in the Amused Moose Laughter Award. On radio, Nathaniel was part of James Acaster's Findings on BBC Radio 4, and BBC Radio 4 Extra's Fresh From The Fringe.

In London, Metcalfe enjoys the status of resident comedian at Josie Long's Treasures Of The Black Heart Club and hosts a monthly comedy club called Tombola Of Fun. He has performed at notable venues and events such as Gilded Balloon, Edinburgh, Hackney Empire and Bestival festival.