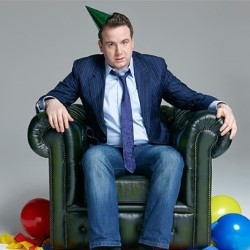 Following a sell-out run in London, Matt comes back to celebrate the great and the good (and Ed Miliband). See his brand new show as the countdown to election 2015 starts here. As seen on Have I Got News for You and 8 Out of 10 Cats. 'A first class comic' (Guardian). 'Smooth as silk. Brings confidence and energy to political satire' **** (Edinburgh Festivals Magazine). 'Combines infectious enthusiasm and gleeful giggling with astutely well-informed political opinions' **** (ThreeWeeks).

The countdown to the 2015 Election starts here. Matt Forde returns to the Edinburgh Festival Fringe with a brand-new show which celebrates the great and the good (and Ed Miliband).

Matt Forde's London show, The Political Party, has been a sell-out during its monthly residency at Westminster's St James Theatre. Matt has brought Parliament to life with his stand-up and debate with some of the Government's most notorious figures, including Alastair Campbell, Nigel Farage, Alan Johnson, Jack Straw, George Galloway, Matthew Parris, Stella Creasy and Charles Clarke.

Matt Forde, a Labour-advisor turned stand-up comedian, is a frequent guest on current affairs shows. He has been a panellist on Have I Got News For You (BBC One) and 8 Out of 10 Cats, a sofa guest on This Week (BBC One), has appeared on Newsnight (BBC Two), Daily Politics (BBC One) and has performed stand-up and written for Russell Howard's Good News (BBC Three). Other writing credits include 8 Out of 10 Cats (Channel 4) and The Last Leg (Channel 4). Matt can be heard on the radio on The Now Show, The News Quiz (both BBC Radio 4) and on his own weekly show on TalkSPORT. Matt regularly reviews the newspapers for Sky News and has contributed to features on ITV's evening news. Matt's Political Party podcast is available to listen to on iTunes and with over 100,000 downloads on Soundcloud, has been picked as the Daily Telegraph's podcast of the week and has hit the top spot on the iTunes comedy chart.