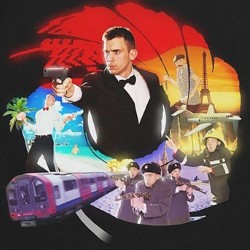 Six months ago, secret agent Mat Ewins died and was killed. Now he's back. Intrigue and nonsense about a spy bionically revived to complete his last mission. From the writer of Uncle Benjamin's Carpet Disaster, Billy Pasties' Cowboy Adventures and Nope! That's Not My Llama. 'Made no attempt to explain where the rest of the cast were, simply claiming they were dead' (ThreeWeeks). 'Unquestionably, Mat Ewins is a very strange man ... while delivering massive hilarity' (Guardian).

Brilliantly bonkers comedian who mixes stand-up, characters and multimedia comedy to create unique stories, usually made-up by the man himself. In Six Million Dollar Ewins he is Mat Ewins, secret agent who died six months ago but is now back for his last mission. He co-founded The Bearpit Podcast with John Kearns, Adam Hess and others. We strongly suspect this is the year he'll really breakthrough.