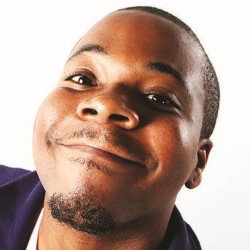 Fresh from a successful run at London's Soho Theatre, Marlon Davis returns to the Edinburgh Fringe Festival with more hilarious tales and mischievousness in his hotly anticipated follow up to his 2013 Fringe show. Catch Marlon performing Once Upon A Grime nightly at the Assembly George Square Studios Four at 7:50pm.

Tipped as 'one to watch' by the Voice newspaper, Davis is quickly climbing the comedy ladder and is regarded as one of the hottest new names on the circuit. Alongside his stand up talents, this bright young comedian is also a respected actor and writer. With a Brown Eyed Boy series on MTV under his belt he also featured in and wrote for the series, Secret Life of Hoodies (Paramount). Most recently he co-wrote and starred in SWA-Sniggers with Attitude (London Live) and featured in two episodes of Kevin Eldon's critically acclaimed BBC2 show, It's Kevin.

His refreshing observations has seen Marlon named as FHM Stand UP Hero 2009 winner, So You Think You're Funny 2006 finalist, Laughing Horse 2006 finalist and Amused Moose Laugh Off 2006 semi finalist.