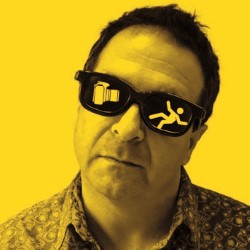 A comedy of betrayal. Mark Thomas tells his true story of how Britain's biggest arms manufacturer (BAE Systems) came to spy on a comedian. A tale of hubris, planes, demos and undercover deceit told by an award-winning performer.

One of comedy's elder statesmen and all-round arty mischief-maker returns to the Traverse this Fringe to revisit his theatrical roots with a comedy of betrayal. Mark Thomas tells his true story of how Britain's biggest arms manufacturer, BAE Systems, came to spy on a comedian in this tale of hubris, planes, demos and undercover deceit. This show is personal, political and, as usual, fucking funny.

Mark's shows have always been entirely different from each other; he's stopped arms deals, created a manifesto and brought the winning policy to parliament, walked the entire length of the Israeli wall in the West Bank and most recently completed 100 Acts of Minor Dissent which included an LGBT gig outside the Russian consulate in Edinburgh last August, taking the police to court over surveillance and finding a new definition for the word 'Farrage'. Mark will perform the completed show at the National Theatre this summer. In 2012, Mark performed his first ever theatre piece at the Traverse, Bravo Figaro, a touching and poignant tale first commissioned by the Royal Opera House about his opera-loving father which sold out its entire run and won Mark a Herald Angel award, a Scotsman Fringe First, and was recently broadcast on Radio 4. This show is set to tour Australia and New Zealand in 2015.

We all know that it's not just his live shows for which Mark creates the trouble he has become famous for; his channel 4 series The Mark Thomas Comedy Product ran for six series, he's published three books and a manifesto, had various series commissioned by Radio 4, won a Sony Award for My Life in Serious Organised Crime, been a regular contributor to political magazine The New Statesman, won numerous awards, holds a Guinness World Record, investigated everything from Coca-Cola to inheritance tax avoidance in various TV documentaries, given evidence to Parliamentary Select Committees and stopped multinational infrastructure deals. Oh, and of course he's been arrested countless times in one day. Fortunately, he has just enough bastard in him to prevent him from becoming a national treasure.