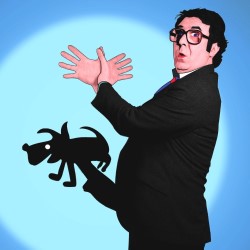 This year, the show will be hosted by Miss Behave and Janey Godley, with Scotsman critic Kate Copstick presenting the Awards. Acts will be announced nearer the date.

The show will also include the Scottish National Russian Egg Roulette Championships, in which famous comedians sit opposite each other at a table. On the table is a box of six eggs - five boiled, one raw. They smash the eggs onto their foreheads until the loser finds the raw egg. It is a knockout competition, supervised by Andy Dunlop, President of the World Egg Throwing Federation. www.eggthrowing.com Last year's contestants included Arthur Smith and Richard Herring.

The comedy awards themselves - which will be given until 2017 - celebrate the impact of the late 'godfather of British Alternative Comedy' - Malcolm Hardee - who drowned in 2005. Wikipedia

Winners announced: around midnight on Friday 22nd August during the Awards Show