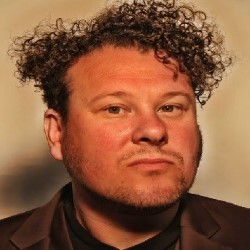 From the writer of Shooting Stars and Mock the Week comes a brand new show with some of the sharpest one-liners you're likely to hear! Like the 'true or false' section from Shooting Stars and 'things we'd like to see' section from Mock the Week? This is the show for you: Maff writes them! Voted Top 10 Shows to See by GQ. 'Genuinely funny' (Metro). 'Want an all out laugh-fest with gags-a-plenty? Maff Brown is your man. I saw him tear the roof off, generating more joy and more laughter than any arena-selling comedian' (GQ).

From the writer of Shooting Stars and Mock the Week comes a brand new show featuring some of the sharpest one-liners you're likely to hear at this year's Edinburgh Festival Fringe (or anywhere else for that matter).

If you like the 'True or false' section from Shooting Stars and the 'Things we'd like to see' section from Mock the Week this is definitely the show for you...

Maff began performing 2005 since when he has become one of the best known performers on the UK Comedy Circuit. As well as his own full-length stand up shows he has also supported some of the country's leading comedians including Greg Davies, Andy Parsons, Terry Alderton, Michael Mcintyre, Jack Dee and Lucy Porter.

He has been appearing at the Edinburgh Festival Fringe since 2007 and Born Again Comedian will be his third solo stand-up show. His self-penned 2012 sketch show Maff Brown's Parade of This garnered 4 star reviews and was voted one of the top ten shows to see at the Fringe by GQ Magazine.

Maff is also a regular guest on Matt Forde's Talk Sport Radio Show and is co-host on The Jon Richardson Show on BBC 6 Music and co-hosts Rock and Roll Football with Ian Wright.

He has been running the Award-winning (Chortle Best Comedy Club Award) Outside the Box Comedy Club for over a decade and runs an annual charity comedy event at London's iconic Comedy Store in support of MacMillan Cancer Support.