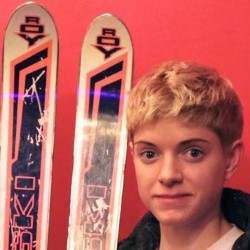 Following a sell-out run at the Soho Theatre, Mae Martin (Russell Howard's Good News, Fake Reaction, BBC Radio 4) is workshopping her new show. With a chaotic mix of stand-up, songs and audience interaction, she will continue to reinforce the stereotype that Canadians chronically overshare. No two shows will be the same. Come every day. 'Natural comic talent' ***** (Skinny). 'She had the audience in the palm of her hand' **** (ThreeWeeks). 'Enchanting.' **** (BroadwayBaby.com).

With a chaotic mix of stand-up, songs and audience interaction, Mae will experiment; presenting diverse chunks of new material and creating a unique show during every performance of the festival. Mae finds her punchlines in thoroughly unlikely places - combining wickedly astute social observation with nostalgic references to her pseudo-anguished past.

Fuelled by the quarter-life anxieties of Britain's twenty-somethings, Mae resurrects the awkward moments of her adolescence. Drawing razor-sharp comparisons between the hopes and aspirations she held in her teens with the social quandaries she copes with in her daily life.

Mae Martin started performing comedy aged 13. By 15 she had received her first Canadian Comedy Award nomination, and at 16 made her Canadian television debut on The Comedy Network's Cream of Comedy.

Since moving to the UK in 2011, she has established a fervent young following. Her appearance as the stand-up guest on Russell Howard's Good News (BBC3) catapulted her into the consciousness of the UK's online teen community. The clip now has almost half a million views on YouTube, and Martin has emerged as a bright new role-model for nervous teens everywhere.

In the last 12 months, Mae Martin has sold out two runs at the Soho Theatre, and is set to release her debut comedy album Mae Martin: Live later this year through iTunes. She has also been seen on Fresh From The Fringe (BBC Radio 4), Comedy Lounge (BBC Radio 1), Fake Reaction (ITV2), and on tour with British Comedy Award Winner Nina Conti.