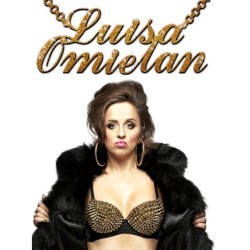 This is the follow up to Luisa Omielan's unprecedentedly successful debut stand up show, What Would Beyoncé Do?! It's a signature party with jokes in, come get me bodied! #AmIRightLadies. 'Crystal clearly a mainstream star in the making' (Guardian). 'Hilarious, expect a full on rearrangement of your insides' (Vogue). 'Fresh, frank and fearless - a gutsy new star is born' (Telegraph). 'Will make you die laughing' (Marie Claire). 'Soul-baring comedy' (Chortle.co.uk). 'Queen B of Comedy' (WhatsOnStage.com).

Luisa Omielan triumphantly returns to Edinburgh with her second hour Am I Right Ladies?! as part of the Laughing Horse Free Fringe.

This is the follow up to Luisa's unprecedentedly successful debut stand up show, What Would Beyoncé Do?! which bolted Luisa into the spotlight last year.

Omielan's new show focuses on the ways in which society gets in the way of feeling good about yourself. Be it in your career, relationship or in your own skin.

Last year, Luisa had her hugely successful debut hour What Would Beyonce Do?! extended five times at the Soho Theatre due to such high demand. She had added dates to her 2013 Edinburgh fringe run and embarked on a UK national tour. Performances led to a run in New York, LA and Singapore.

This year, Luisa is also the only woman out of only three comics in the UK to be asked to the Montreal Comedy Festival with Jimmy Carr and Noel Fielding. She's also just recorded her own BBC Radio 2 pilot, Luisa Omielan's Party which airs June 10th. This comes with the announcement that Luisa has confirmed a run in London's West End in November of this year. Phew!