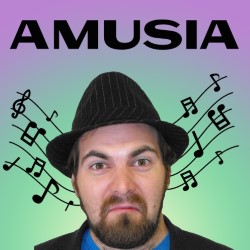 Is Amusia a fantasia of amusement, or does it really mean something quite different? Musical comedian Luc Valvona plays a selection of his songs and then tries to sell you his CDs.

Amusia - Is it a fantasia of amusement, or does it really mean something quite different? Luc Valvona presents his unique style of musical comedy and stand up in this brand new show featuring multiple instruments and musical technology.

Songs range in style and subject matter such as financial revolution, Samuel L Jackson and the inevitable zombie apocalypse. Along with clever, witty songs and the occasional smattering of smut, Luc has also carefully pioneered an entirely new genre of music especially for this show!

Having previewed 6 dates at the Brighton Fringe to positive audience feedback, this full run of the Edinburgh Fringe is no longer a work in progress!