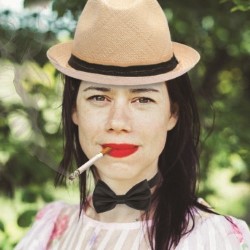 A genderless riot from a little old force to be reckoned with. Sanders goes hard-pedal without too much fuss. Forty five plus jokes, six props, one hero and I dare say a bit of heartbreak (you) and a smattering of ground-break (her). Sanders generally, absolutely, ultimately nails it. Sleaze: turned down. Clothed: fully. As seen on Stewart Lee's Alternative Comedy Experience and Russell Howard's Good News. 'Destined for hugeness' (Time Out). 'Crazy off-beat surrealism, something new is happening in comedy' (Independent). 'If you're not entertained by this you've got a problem' (Fest).

Award-winning Lou Sanders' upbeat, unpredictable breed of eccentric comedy is tricky to classify. But the joy is in the journey and the result is mesmerising.

Fast gaining a reputation as a comic's comic. Lou has written additional material for Miranda Hart's 2014 tour, two series of C4's Stand up for the Week, BBC3's Laughtershock & various TV pilots. She was in the top 10 jokes from the Edinburgh Fringe 2012, Dave TV, and had a featured joke of the day in the Independent.