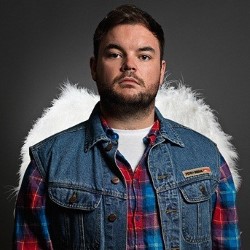 Fresh from supporting Rob Beckett on his sold out UK tour, angelic-voiced Lloyd Griffith 'The next big thing' (FHM) performs his sexy debut show. Really brilliant jokes and some truly incredible singing from this choirboy turned comedian and heartthrob. But don't just take his deluded word for it: 'It's clear from the outset that Griffith has star quality' (ThreeWeeks). 'Griffith in particular was absolutely outstanding' (BroadwayBaby.com). 'Inherently funny...very neat lines in his comic repertoire' (Chortle.co.uk). So there you have it. Songs. Jokes. A sexy man. Bring your family.

Fresh from supporting Rob Beckett on his sold out UK Tour, the angelically voiced Lloyd Griffith is primed and ready to perform his sexy debut hour at this years Edinburgh Fringe. If you're looking for a show packed full of incredible jokes and some equally incredible singing from a choirboy turned comedian then his aptly titled Voice of an Angel, Boy of a Trucker is the show for you.

Lloyd started performing comedy in 2009 and rapidly established himself as one of the most innovative and original comedians on the circuit, regularly performing at some of the largest clubs in the UK. Hailing from Grimsby, Lloyd is now London based and can also regularly be found singing with the choirs of Westminster Abbey, Windsor Castle and many others, reinforcing his status as a professional choral singer and choir boy.

In 2011 he was selected to perform as part of the prestigious Edinburgh package show: Big Value Comedy Showcase. A year later in 2012 he performed as part of the sell out package show AAA Stand-up Late in the Pleasance Courtyard. In addition to his comedy accolades, Lloyd has also appeared in a number of short films including The Shop for Kudos Productions and The Bush Theatre and Inheritance for DigitasLBi and Pulse Films.

Lloyd is also no stranger to the world of Television with massive appearances on BBC 3's Sweat The Small Stuff and appearing as a warm up act for The Matt Lucas Awards on BBC1 and Britain Unzipped on BBC Three. Hailed as the 'next big thing' by FHM, Voice of an Angel, Body of a Trucker is a show not to be missed. After all, who wouldn't want to see a burly comedian not only cracking hilarious jokes but also singing in opera!