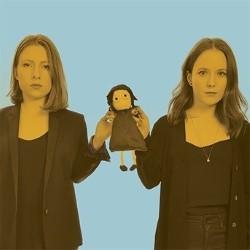 Humans on the edge. Humans on the run. Humans in double-denim. Sketch duo Lazy Susan (formerly Lebensmüde) unleash a gang of characters clawing their way back from the brink. Watch as this anarchic (but friendly) duo pour reality into a snow-globe and throw it down the stairs in their debut hour. Directed by Christine Entwisle (RSC). 'Skillfully performed and delightful to witness' (List). 'As adept at character and heart as they are at getting laughs' (Brian Logan, Guardian). 'One of the next top sketch groups' (Tom Parry, Pappy's). 'Very funny and different' (Jack Dee).

Introducing what will undoubtedly be one of the hottest new acts at this year's Fringe, sketch duo Lazy Susan are two of the most funny, talented women to emerge in years. They will be performing their first ever hour of fun, character-driven sketch comedy - with smatterings of the dark and surreal but with plenty of heart - at the Pleasance Courtyard this August.

Humans on the edge. Humans on the run. Humans in double-denim. Lazy Susan unleash a gang of characters clawing their way back from the brink. Watch as they pour reality into a snow-globe and chuck it down the stairs in this daft debut hour from the anarchic (but friendly) sketch duo.

Lazy Susan are writer-performers Celeste Dring and Freya Parker. As Lebensmüde, they dipped their toes into the Free Fringe in 2013, where they shared the stage with with Ed Kiely and performed their first 35 minutes of material to warm critical appreciation, as well as appearing in Max & Ivan's Edinburgh Comedy award nominated show. They devise their shows and are directed by Royal Shakespeare Company alumnus Christine Entwisle.

Celeste Dring
Celeste studied English Literature at Cambridge University and trained in the Meisner technique at the Actor's Temple. She also trained in Chicago style long-form improvisation with Second City alumnus David Shore. Recent acting credits include The Festival of the Spoken Nerd (Radio 4), Max & Ivan's Edinburgh Comedy Award nominated show The Reunion in Edinburgh and The Soho Theatre and Miranda in The Tempest at Cambridge University, ADC Theatre and US Tour.