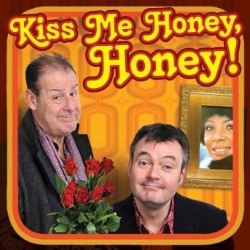 Due to popular demand, the Fringe First 2013 award-winning play, written by Philip Meeks, returns for a limited run only! Scotland's beloved panto stars Andy Gray and Grant Stott star as two men of a certain age who find themselves down at heel, living in a grim bedsit ruled by a ferocious landlady, who form an unlikely friendship through a shared love of Shirley Bassey. Together they begin a hilarious search for the women of their dreams! 'Remarkable talent ... dazzling display of comic genius' ***** (Edinburgh Evening News). 'Whiplash wit' (Guardian).

Two men of a certain age form an unlikely friendship through a shared love of Shirley Bassey. Together they begin a hilarious search for the women of their dreams, after their lives seem to have fallen apart. Acclaimed Scottish actors Andy Gray and Grant Stott star as Ross and Graham ... and all the women in their lives, in a "dazzling display of comic skill" The Scotsman.

The show is alarmingly fast paced, with a darkness underneath the hilarious, sometimes shambolic look at life, relationships and what it means to reach a more 'mature' age and stage and find themselves not where they'd thought they'd be.

Commissioned for the Edinburgh festival fringe by Karen Koren, Artistic Director of the Gilded Balloon, this is truly a play for Edinburgh. Starring two local favourites of Panto Dame fame - Andy Gray and Grant Stott - out to show they have a serious side too!

Written by the acclaimed playwright Philip Meeks, who also wrote the 2012 Gilded Balloon hit Murder, Marple and Me and directed by the much loved Sam Kane, this star-studded creative team sparkle.