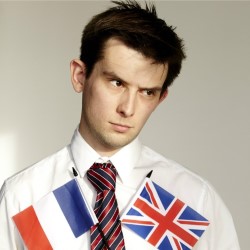 In 2003 a US led coalition went to war with Iraq and Kieran Hodgson spent 10 days living with a very nice French family. Fresh from appearances on Jonathan Creek and Alan Partridge: Alpha Papa, character comedian Kieran Hodgson returns to the Fringe with a brand new hour exploring his formative experiences on an unforgettable school trip where he truly learnt the meaning of croissants, which is crescents. 'Superb ... perfectly observed' **** (Fest). 'Hilarious ... a tour-de-force' **** (ThreeWeeks). 'A one-man Little Britain' (LondonIsFunny.com).

The uncompromisingly clever and overwhelmingly skilled character-man Kieran Hodgson returns to the Fringe. With an extraordinary new hour exploring his formative experiences on an unforgettable school trip, French Exchange presents a tentative step into the cultural unknown.

Hodgson takes us on a nostalgic journey full of puerile embarrassment, unrequited love and comic growing pains. In his role as mischievous narrator, Hodgson leads us down the rabbit hole, going on to effortlessly inhabit a varied buffet of characters; from acerbic Mrs Cook the French teacher, to her long-suffering husband (and the trip's coach-driver) Richard.

Mercurial by nature, Hodgson needs only to adjust his tie or tilt his head and he transforms from the terrifyingly alluring 'Shelley Girls' of Shelley College, Huddersfield to bovine-joker Curtis. French Exchange is a fast-paced masterclass of character acting. A scenario that for many occupies a place of fond nostalgia; Kieran's circumstance is instantly recognisable, yet the humour delightfully unexpected.

Hodgson comes to Edinburgh after a thoroughly successful 18 months that included appearances in Jonathan Creek and Alan Partridge: Alpha Papa. A young veteran of the festival, he began as a member of the Oxford Revue, going on to star as one of the critically acclaimed, Fringe-Favourites Kieran And The Joes; success that has continued througout his solo work.

Last year's show, Flood (at Underbelly), was a brilliant success, and was selected in Such Small Portions' 'Picks of the Fringe 2013' and one of Laugh Out London's 'top 10 sketch and Character Acts at the Fringe'.

Alongside live performances, Hodgson is in high demand in the radio world; currently writing a pilot for BBC Radio 4 and starring in The Barchester Chronicles: Dr Thorne. He appeared on Fresh From The Fringe in 2012 and played the role of King Maximilian of Liechtenstein in Cabin Pressure, both also on BBC Radio 4.