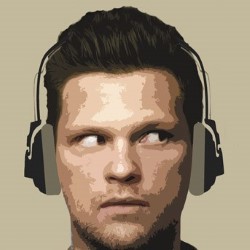 Julian is a nationally touring American comedian who was most recently seen as Whitney Cummings' co-star on E!'s Love You Mean It. In 2011 he won the New York's Funniest competition and filmed his half hour Comedy Central Presents stand-up special. Julian has performed on Late Night with Jimmy Fallon, Conan and This American Life and regularly appears on Chelsea Lately (America's Masterpiece Theatre). Dream Girls combines stand up with an embarrassing amount of truth to identify the theme of all his catastrophic relationships. Julian is a dreamer and, unfortunately, love only exists in reality. Whoops!

US comic Julian McCullough debuts at this year's Edinburgh Festival with his show Dream Girls. Julian offers unparalleled access to his catastrophic love life, combining epic pop songs, deeply insightful commentary and a killer power point presentation. He is a dreamer, but unfortunately love only exists in reality, or as he puts it: "Finding love is easy when it's mostly in your own head".

Dream Girls recounts romantic discoveries of the girls he dated, with both an embarrassing amount of truth and the slow and devastating (for the people in the story, not the audience) realisation that girls are much more than a combination of Radiohead lyrics and Winnie Cooper from The Wonder Years.

Julian is an American actor, writer and comedian, residing in Los Angeles. He is best known for his appearances on Love You, Mean It with Whitney Cummings, Chelsea Lately and MTV's Guy Code. He hosts America's Very Funny News and has performed on Late Night with Jimmy Fallon (who he is supporting on a string of dates this Spring), NPR's This American Life and hosted three stand alone specials for VH1.

In 2011 he won the New York's Funniest competition and his Comedy Central Presents stand-up special aired. He has also taken part in the Just For Laughs Festival in Montreal.