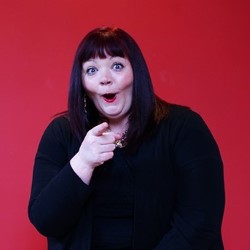 Love, life, families, losing weight and things that make us happy. Jules Maxine shares her unique comic take on these and more in an hour of life-affirming laughter. Jules talks about the things we care about - relationships, sex, reality TV, social media, winning the lottery, payday loans - with a sense of absurdity and passion about the way families screw us up and the system screws us over. Talking about the things we all share, saying what we all think, but wish we had said.

The 42 year old comedian - who recently won the right to become a co-host with Justin Lee Collins on Fubar radio after smashing her auditions - shares her unique comic take on love, life, families, losing then gaining weight, and the things that make us happy.

In the words of one of Jules' comic songs - it's lies, all fucking lies. Our parents lie to us (this will hurt you more than it hurts me). Politicians lie to us (we will deliver what we promise in our manifesto). Companies lie to us (try this diet and you can lose up to two stone a month without missing food). Television lies to us (you can cook this nutritious and affordable meal in just 15 minutes for £5). Adverts lie to us (get a loan at affordable interest rates). Friends lie to us (you look lovely in that new outfit). Jules tells the truth.

During the show - 2.30 to 3.30 at Ryries bar, 1 Haymarket Terrace from August 2 to 24 - Jules talks and sings about the things we all care about. Relationships, sex, reality tv, social media, winning the lottery, payday loans - with a sense of absurdity, keen observation, and passion about the way families screw us up and the system screws us over. She says the things we all think but wish we had said - laughter as group therapy.

All this plus her own comic songs commenting on life, the universe and everything and a special appearance by the Qtapotamus.

"If laughter is the best medicine," said Jules, "you should be able to get this show on the national health."

Jules Maxine has been singing and acting since the age of eight with appearances at drama festivals in London, Amsterdam and Switzerland. She has been gigging across London and East Anglia as a stand up comedian and TV appearances include Four in a Bed.