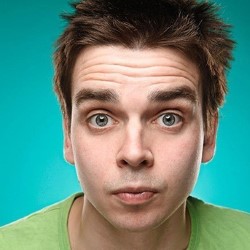 Having delivered one of Time Out's Top 10 Free Shows of the Fringe 2013, Joz Norris is doing a show as himself this year, but he's easily distracted so he might occasionally disappear into a tangent where he's been married for 20 years. Essentially, this is about an asexual boy who desperately wants to be in a relationship but has no idea why, other than that he saw it in a Richard Curtis film. 'Quality moments of silliness' (LondonIsFunny.com). 'Norris has created a genuinely brilliant character ... the audience loves every second' (Skinny).

The boy behind one of Time Out's Top 10 Free Shows of the Fringe 2013 is returning with something bigger, better and less fictional. This time, there are no wigs and no capes and no silly voices. Just a shed-load of naïve enthusiasm and a collection of anecdotes about girls.

In his first full-length non-character show, Joz Norris sets out to tell the story of an asexual boy who really wants to be in a relationship but has no idea why, except that he once saw it in a Richard Curtis film. It is the story of a boy who was coerced into his first kiss before he knew what a kiss was, setting him back years, and who has never been naked for longer than an hour.

A stand-up show with elements of sketch and clowning, Awkward Prophet is a hilarious and endearing glimpse into the bits and pieces that make up the brain of a young man trying to work out what he wants from the world, how to get it and just how much his own naivety gets in the way.

Norris is a regular performer on the stand-up, clowning and character comedy circuits, and a member of the Chortle Award-nominated Weirdos Collective. His previous show Joz Norris Has Gone Missing was featured as one of Time Out's Top 10 Free Shows of the Fringe 2013. As well as his own live comedy and theatre work, he has performed in sketches for companies including Turtle Canyon Comedy, Yalli Productions and Off Key Creatives, and provided backing vocals for a Rolf Harris album in 1997.