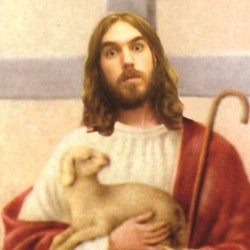 Sold out: Melbourne Fringe, Adelaide Fringe, Melbourne International Comedy Festival 2014. Winner Best Comedy Melbourne Fringe 2012. Ever wanted to heckle Jesus Christ? Maybe just ask him a little question? Well now's your chance. Award-winning Australian Josh Ladgrove brings his must-see improvised performance where you, under the watchful eyes of God, get to heckle his son. The perfect show for men, women, priests (and by extension sexual deviants) and Christians/non-Christians. 'The audience became part of the performance and punters were laughing uproariously at their own jokes.' **** (RipItUp.com). 'An exceedingly funny show' **** (Adelaide Advertiser).

Have you ever wanted to heckle Jesus Christ? Maybe just ask him a little question? Throw something at his head? Well now's your chance.

In this must-see improvised performance, under the watchful eyes of God, the audience get the opportunity to heckle His son.

Come Heckle Christ comes complete with an ACTUAL CRUCIFIX and has been whipping up controversy down under. Entirely improvised, dynamic and chaotic with the potential to cause a real stir, it is a spectacle that audiences will be thrilled and perhaps a little shocked by...

Tensions ran high when the show hit Adelaide ('City of Churches'). Josh received threats and there were regularly 30 enraged protesters outside the show, with some extremely vocal street preachers doing some heckling of their own. The commotion caused the police to intervene and was reported in the local and national press. Josh was also forced to hire a security guard & metal detector on the door. Melbourne, on the other hand, took the performance with a pinch of salt so let's see how Edinburgh handles the show's essentially positive content... The team aren't planning for additional security just yet - although you never know...

Josh Ladgrove is an award-winning Australian comedian/performer/writer who has been smashing up the Australian live comedy circuit for the past seven years. He has spent the past 5 years selling out festivals and building up a cult following as the popular character 'Dr. Professor Neal Portenza' and developed Come Heckle Christ as an improvised performance to play with the idea of audience dynamics... and because he looks a bit like Jesus.