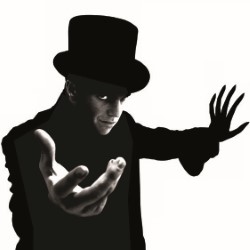 It's 3:30pm and the devil wants a chat about 2,000 years of humans, sinister elephants, Polynesian zombies and Mickey Mouse. Award-winning lunatic and word manipulator John Robertson, 'a manic and quick-witted revelation' (Scotsman), brings you the world, then kicks it. Get ready for the best bits of world history in one loud hour from one loud man. ***** (Skinny).**** (List). ***** (BroadwayBaby.com).

WHAT is a John Robertson?

A John Robertson is an award-winning lunatic and word manipulator, 'a manic and quick-witted revelation' (Scotsman), he brings you the world, then kicks it.

John Robertson is a whimsically heartless, bright-as-a-button Australian dandy, a surreal storyteller who takes words and historical events and makes them his playthings. They play brutally, movingly and in a dark and mysterious fashion. You will laugh at the weaving of lies and the unravelling of John's brain. This is manic depression without the depression. John Robertson is the comedian you deserve.

WHAT is he up to now?

WHAT is this show all about?

We are DONE with stately world misery as told from an armchair. This is NOT THAT SHOW! This is a big, blustery, non-musical musical led by John's insane improvisational brain. JOIN THE PARTY!!

Puppets! Blood! Men in corsets! It's history's best bits jammed together in a critically acclaimed hour of mayhem, murder and vampires that don't sparkle.

SEE! The Marquis de Sade fail to pick up prostitutes!

MARVEL as Vlad Tepes and his Amazing Stakes do their thing!

It's a show for boys and girls of all ages, especially the dark ages. It's a manic journey through history's biggest bastards, with all the icky bits left in. Join sexy bad guy Robertson as he pulls out puppets, vampires, a ukulele, blood, gore, the Marquis de Sade, Stalin, Hitler, exploding dogs and all manner of rogues and rapscallions. It's fun, it's frantic - it's the comedy of your nightmares.

Evil (and the nifty history thereof) is a longstanding favourite topic for John, who started telling the tales of wickedness and malevolence at the Free Fringe in 2010. Since its last Fringe outing, his narration of times-gone past and their inherent immorality has been through many evolutions. Now written anew with completely original and fresh material for the Fringe 2014 - John is once again ready to beguile his audiences with tales of sin.