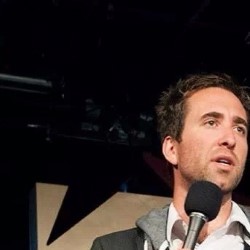 A new stand-up show from Jewish Comedian of the Year, and the TV warm up for The Graham Norton Show and Mock The Week. As seen on Dave.

Once described by a critic as "chatty and confident", Joe Bor feels that two adjectives are just not enough define his life. But what does define him? Being Graham Norton's warm-up man is a nice description for him, but that's still not enough to tell the whole story...

Joe's recent victory at a competition for Jewish comedians has him further pondering his identity. The neurosis and anxiety he feels after his win might suggest his Jewish credentials are in full working order (and hey, they are handy for his profession), but is he a phoney Jew?

Joe starts to look at his life with his Jewish background in mind. He's got the T-shirt (he's circumcised) but he is partial to pigs-in-blankets. So it's 1-1 on the pork score then. He was forced to sing Jewish songs by his mother, but he's chosen Christmas over Hanukkah because the presents are better. He knows his way around a synagogue, at least enough not to bump into anything, but is more likely to be playing football on the Sabbath than observing his faith.

Joe Bor is the warm up for The Graham Norton Show and Mock the Week. His comedy career has seen him crowned with numerous accolades including the winner of Jewish Comedian of the Year, but also Best Value Show at Leicester Comedy Festival, and he was a finalist for Comedian of the Year. Playing the prestige comedy clubs and festivals as a stand-up, Joe has also performed as part of two sketch groups and, in 2011, he wrote and directed his first play, Who Killed the Counsellor? In 2014, to great acclaim, he presented Jasper Cromwell Jones, his first character creation, at the Edinburgh Fringe. Joe will be bringing him back this year in Jasper Cromwell Jones: This Is Not A Holiday. Joe was named in The Daily Telegraph's top people to follow on Twitter and in The Scotsman's 21 Funniest Fringe Jokes.