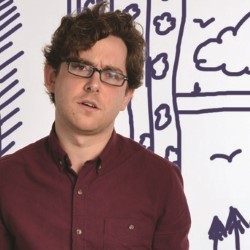 A bedroom can be many things: Sanctuary. Workspace. Fort. When Amused Moose Laughter Award nominee Jim Campbell] moved house the mementos he found told his life story through a series of forgotten embarrassments. Here he invites you into his room - not in a weird way - to relive his misadventures. It also has a cool dog in it. 'Charmingly fresh ... will leave you entertained and enlightened... Superb' (List). 'Exquisitely written, punchline-driven material without cliche ... a future star' (Chortle.co.uk). **** (Fest).

Jim Campbell has been making waves since his critically-acclaimed Edinburgh debut, 9-Year Old Man, which seized the accolade of one of the Top Ten shows of the festival in the Amused Moose Laughter Awards.

Directed by Edinburgh Comedy Award nominated director Paul Byrne, Personal Space is staged in the intimate and unusual setting of Jim's bedroom as he packs it away to move in with his girlfriend and embark on a new life in a new city.

Like a show and tell sleepover, join Jim as he says "so long and thanks for the memories" to his room while he rummages through the objects of his past, celebrates friendship and reflects on the falling out and making up that is all part of life's rich tapestry.

In addition to his stand-up credentials, Jim works as a writer having penned material for Russell Howard's Good News and ESPN's Talk of the Terrace. He also co-hosts the successful podcast The Football Ramble, which has won 7 awards and has over 80,000 listeners.