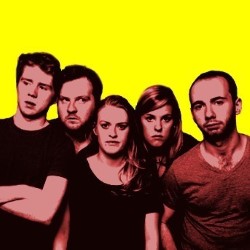 Fresh from their appearance on Radio 4's Sketchorama, sketch comedy quintet The Jest will be taking their brand new show to the Pleasance Courtyard at the Edinburgh Fringe.

Recently slimmed down from nine-person sketch troupe Simply the Jest (who performed at Edinburgh 2011-13), they have received critical praise for their unique brand of sketch comedy, receiving four-star reviews from national publications including The List and Broadway Baby.

They are currently starring in the latest series of Radio 4's Sketchorama, the BBC's showcase for the most exciting new voices in sketch comedy. They have also been recommended by the Londonist and chosen as one of Leicester Mercury's 'Three to See' at the 2014 Dave's Leicester Comedy Festival.

The Jest is made up of University of Exeter graduates Ella Ainsworth (School of Comedy on Channel 4 and at the Pleasance, the BBC's Being Human, Hustle), Tristan Rogers, Jack Stanley (BBC1's Little Britain, the 2005 film The Hitchhiker's Guide to the Galaxy), Luke Theobald (runner-up on an episode of Pointless...) and Bryony Twydle.