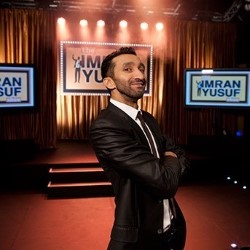 Best Newcomer nominee 2010 and star of Michael McIntyre's Comedy Roadshow, Imran Yusuf returns to the Edinburgh Fringe with a brand new hour of stand-up self-discovery. When you're internationally outcast in an increasingly divisive world and burdened with the spirit to wear your heart on your sleeve, both pain and hilarity shall ensue in this show of novel dynamic perspectives with heartfelt fragile introspection. Listen, laugh and feel the roar of the underdog! 'Sharp, passionate and uplifting' **** (Telegraph). 'An hour of cheek and charm' **** (Independent).

The first comic to start the trend of nominations from the free scene, returns to the Edinburgh Festival for his latest solo show. Imran has been enrapturing audiences up and down the UK with two successful tours and right across the world, from South Africa to South East Asia, even performing in Hindi during his stints in India’s exciting emerging comedy scene.

Imran has proved himself as a comic with true international appeal thanks to his effortless cheeky charm and innate ability to engage with audiences right across the cultural spectrum.

Imran has proved to be a diverse performer across both the stage and screen, so expect to see more of him in the future!