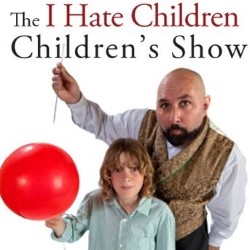 The meanest magician in the world is back with more tricks, more fun, and more inexpensive booze. You love your kids but hate boring kid shows so get tickets before it sells out. You've seen American magician Paul Nathan on HBO, MTV, even Star Trek Voyager; but you've never seen him like this. Each child is personally insulted while parents are served champagne and treats. Everyone over eight is invited to help out on stage. Your kids are the stars and the heroes of this award-winning magic show that leaves everyone laughing.