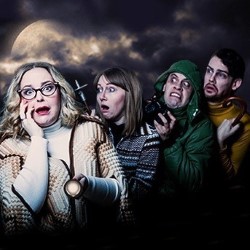 The year is 1974, the town is Hemlock-Under-Lye and when werewolf attacks threaten teatime, there's only one person you can call... Having splattered the UK with critically acclaimed debut show The Boy Who Kicked Pigs, macabre comedy-knitters Kill the Beast return with a brand-new tale of supernatural slaughter. Combining beautiful visuals, original music, quite an important pigeon and several different hats, He Had Hairy Hands will take you on a dark, tangled journey through an exceptionally horrifying mystery. 'A scorchingly talented company' **** (TimeOut). 'Wickedly clever' ***** (WhatsOnStage.com). 'Bitingly funny' **** (Fest).