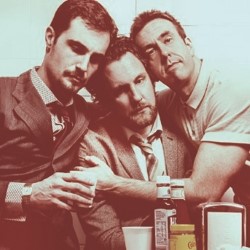 Attention grabbing opener! Brief description of performers involved: Stephen Harvey (Perrier nominee), Marcus Garvey (Peep Show, Psychoville, Four Lions), Gareth Kane (What's On Stage nominee) - followed by promise of sketch originality, hilarity and something else to complete the universal rule of three. Finish off with slightly petulant remark to prove how clever you are. 'Their dexterity and timing are second to none. It took sheer determination on the audience's part to regain composure between scenes' **** (EdFestMag.com]). 'Cracking jokes ... a special delight **** (Chortle.co.uk). 'Flawless comedy' **** (SuchSmallPortions.com). www.harveygarveyandthekane.com

Bound & Gagged are proud to present the highly anticipated sketch show Harvey, Garvey And The Kane making their debut as a trio at the Edinburgh Festival Fringe this year at the Underbelly Dairy Room.

Although this is a new ensemble for the Festival, they've a good deal of experience when it comes to taking successful shows to Edinburgh and are the team behind the sell-out comedy sketch show, Men Of War. Marcus directed three runs of Watson & Oliver (BBC2), and has appeared in Scratch Impro alongside Gareth, the co-creator and producer of The Reduced Edinburgh Fringe Improv Show. Stephen Harvey was one half of the Perrier nominated double-act Toulson & Harvey, and hosted the long-running Underbelly comedy/horror show, The Witching Hour, with special guests including Tony Law, Marcus Brigstocke and Les Dennis.

This is a show about three grown men inspired by what both excites and winds them up about day-to-day life. We see the ups and downs of friendship, family life, and some of the best gags to have come out of the Second World War. Sharp dialogue delivered at a blisteringly fast pace one moment, and then a bit of darkly comic absurdity the next, the show evolves to encompass audience participation and interaction mixed with some well-observed character comedy. This is intelligent silliness with a touch of stupid cleverness.

Stephen Harvey won Best Actor at the Sitcom Mission sponsored by Hat Trick in 2011 and performs regularly on BBC Radio 4 for the Comedians Theatre Company. Credits include Broken News, Nathan Barley by Charlie Brooker and Noel Clark's 4.3.2.1. He has just finished working on The Javone Prince Show for the BBC.

Marcus Garvey has a list of TV credits including Peep Show, IT Crowd, Psychoville, Last Tango In Halifax, Broadchurch, Wolfblood, Count Arthur Strong, White Van Man, Starlings, Shameless, Trollied, You Me & Them, and Pat & Cabbage. Film credits include Four Lions, and The Incident.

Gareth Kane was nominated for a What's On Stage award for Best Book in 2010 and is the resident compere at The Funnyside Club. Theatre work includes runs at The West Yorkshire Playhouse and The West End, whilst he has also appeared in So Graham Norton (CH4), Secrets (BBC) and Ross Lee's Ghoulies (NICKLEODEON).