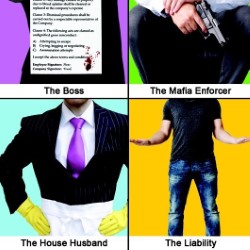 Underworld enforcer Howe's not afraid to die, but it would've been nice if Frank had sent someone vaguely competent to do the job. Partner in life and crime Wallace isn't doing much to ease his mind on that score, 'they made a terrible mess of the last one. First bullet only took his ear off'. A bleakly comic Ortonesque farce by Julian Poidevin, directed by Peter Darney. Winner of Writer's Avenue's Best Play Award. 'Pick of the Week' (Telegraph on Kindness).