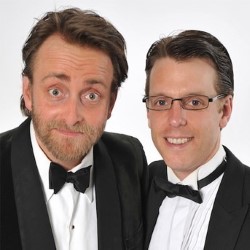 G'ninth G'normous year at the Pleasance! Tim and Duncan return for one week only with their award-winning, hilarious show. Featuring the songs and wit of those masters of mayhem, mirth and Madeira, and legends of 1950s and 60s comedy, Flanders and Swann. This Fringe favourite includes a new song selection for 2014, with all the classics from The Hippopotamus (Mud, Mud, Glorious Mud) and The Gnu to The Gasman Cometh, plus many more hidden gems. Featuring award-winning comic Tim FitzHigham and Radio 4's Duncan Walsh Atkins. 'Muddy marvellous' (Evening Standard). 'Impressive... a delight!' (Times).