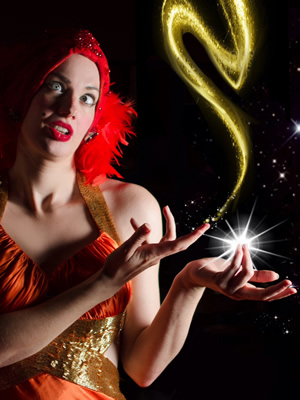 This August I'll be performing at the Edinburgh Festival with my show Madame Magenta: Libros Mystica, and I predict that I shall find the experience most invigorating! I also predict that I shall be near-deafened by the howl of dying egos, my nostrils invaded by the reek of performers vomiting their self-worth onto the streets of Edinburgh. A situation that fills me, as you can imagine, with endless satisfaction. Nothing is better for the psychic business than desperate, vulnerable people.

Where there is pain, there I will be, offering my services for a very reasonable price. But because I am an empathetic creature and not averse to free publicity, I shall also be helping certain poor deluded souls gratis, here on the British Comedy Guide. Last week I used my powers to guide the Edinburgh actions of that fragile creature Jim Davidson. This week, I've turned my attention to another truncated James: Jimmy Carr. Don't worry, Jimmy: I'm here for you!

This week I shall be employing the ancient Chinese art of I Ching. In my experience, the I Ching is a divination tool with a particular emphasis on finances, which I thought might be of interest to Mr Carr. Suits and hair lacquer don't come for free, you know! (Unless you steal them. Not that I'm calling Jimmy Carr a robber! I'm not. I'm sure he pays for everything he uses, whether it be pomade for his fine helmet of hair, or contributing to the country's infrastructure, health service, education system, etcetera. Well, I'm sure he does NOW, anyway.) 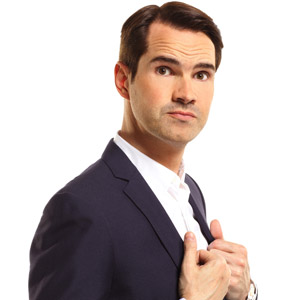 Quick guide to I Ching: Comprised of 64 hexagrams carved onto bits of wood, with quite frankly baffling meanings assigned to each one.

As usual, I entered a trance state through the consumption of a homeopathic treatment (0.000001g of ground cubic zirconium suspended in a litre bottle of rubbing alcohol). In this state, I pulled a hexagram from a pouch and studied its meaning.

Result: hexagram 41. Meaning (according to a genuine Chinese site as filtered through Google Translate):

This hexagram represents a decrease of the lower trigram in favour of the upper, because the third line, originally strong, has moved up to the top, and the top line, originally weak, has replaced it. What is below is decreased to the benefit of what is above. This is out-and-out decrease. If the foundations of a building are decreased in strength and the upper walls are strengthened, the whole structure lowers its stability. Likewise, a decrease in the prosperity of the people in favour of the government is out-and-out decrease. And the entire theme of the hexagram is directed to showing how this shift of wealth can take place without causing the sources of wealth in the nation and its lower classes to fail.

Exactly. All the bloody hexagrams have meanings like this. Ridiculous.

Luckily I'm an expert and most people aren't, so here's what I've taken this to mean:

Jimmy's time in Edinburgh will be most notable for its strongly altruistic bent. Recognising the struggles of his less successful peers, he will take it on himself to foot the bill for every comedian at the Festival. Bearing in mind that the financial loss for a performer can range from a couple of hundred pounds to several thousand, and also bearing in mind that there are over 3,000 shows at this year's Festival, this will result in Jimmy donating somewhere in the region of 6 million quid. However, he'll be able to claim this back on his yearly tax assessment, resulting in another financially fecund venture for young Jimmy.

I'll be helping other comedians, via British Comedy Guide, up until the Fringe. If you need help you should buy my book or come and see my show - 'Madame Magenta: Libros Mystica' - at the Voodoo Rooms in August. Listing