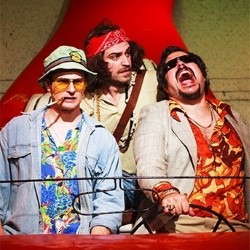 'Gloriously whacked out' (TimeOut). Buy the ticket, take the ride with Dr Gonzo and the esteemed Dr Hunter S Thompson on a wild journey to the heart of the American Dream. Fresh from a sell-out run in London earlier this year, the show features designs by Ralph Steadman. Directed by Lou Stein. 'A real blast' **** (Telegraph).

Fresh from its wildly successful London run at the Waterloo Vaults Festival earlier this year, Lou Stein's stage production of Fear and Loathing in Las Vegas comes to The Pleasance from the 30 July to the 25 August.

Fear and Loathing in Las Vegas is a funny and dark journey to the heart of the American Dream. The production balances the hilarious commentary of Hunter S Thompson, with the hallucinogenic rollercoaster ride which his alter-ego, Raoul Duke, and his drug-crazed attorney Gonzo take as they encounter an array of terrified locals and blood curdling lizards and search for the American Dream.

Ralph Steadman, legendary illustrator and Thompson's collaborator, provides much of the visual inspiration for this production and his artwork is featured in it.

It is a decade since Hunter Thompson's death, and Fear and Loathing in Las Vegas presents an opportunity to remember and rejoice with the inventor of gonzo journalism.

The play's writer and director Lou Stein said: "Discover one of the wildest, most vibrant and utterly essential books of our time in a theatrical context. By surrounding the audience with the colour, sounds and soul of the 70s, the play will become an event experience. The production marks a continuation of my long friendship with the artist Ralph Steadman, whose visual art is part of its DNA, but it is also a celebration of Hunter S Thompson - he was an ally, friend, and has been a gonzo beacon for me throughout my theatre career."

Rob Crouch stars as the attorney Dr. Gonzo. Rob's one man-show about Oliver Reed, Wild Thing, has been touring nationally and recently appeared at the Ambassador's Theatre, London. American actor John Chancer plays Hunter Thompson. The cast of six play dozens of roles made famous from the book.

The sound-track for the production will include such 70's hits as White Rabbit, Spirit in the Sky, One Toke Over the Line, Sympathy for the Devil and more.