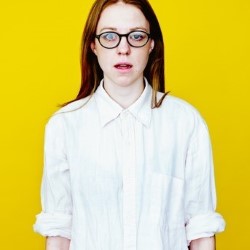 In her debut show, the urgently striving to be unstoppable Ellie White presents an hour of idiosyncratic character comedy. Catch her now before she's not in Edinburgh anymore. 'A phenomenal character comedian' (Skinny). 'Excellent characters' (Spoonfed.co.uk). 'A pleasure to watch ... satisfyingly outlandish' (ThreeWeeks). As heard on BBC Radio 4's Fresh from the Fringe 2013, BBC Radio 4 Extra's Newsjack, and seen on BBC3's Live at the Electric and Jamie Demetriou's Comedy Blaps. Join this character comedian as she coughs up her debut hour of human creations.

In her debut hour, the striving-to-be-unstoppable exquisite character comedian temporarily (one hour) suspends her on-going sense of self (whole life).

Our fervent young chameleon character act triumphantly airs a dirty laundry of senseless character-creations, one after the other. This is Humans... a promenade through the foolhardy, the birdbrained, and the unfamiliar. Expertly playing against age, gender, appearance, and level of self-awareness, Humans is a sophisticated take on the traditional solo character show. White brings depth and authenticity to her creations - the sorry-aged competitor in a one-woman beauty pageant, the empty speech at a pet's birthday party, the motivational speaker distinctly lacking in motivation -all the while favouring the offbeat laugh in her joke-rich writing.

What unites these characters is the sense of isolation that they all exhibit; each oneseeming as though they're staring at their own reflection, yet without any sense of self-reflection.

Since starting out at the Fringe in 2010 as a member of student revue show The Bristol Revunions, White has appeared in Live At The Electric (BBC3), Jamie Demetriou's ComedyBlaps (C4), Adam Hess' Happenings (BBC Online) and was featured in BBC Radio 4's new comedy showcase Fresh From The Fringe. Earlier this year she featured as a cast memberin BBC Radio 4 Extra's topical sketch show Newsjack.