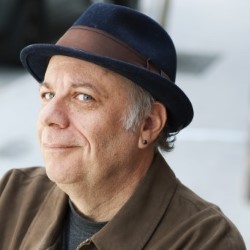 American Eddie Pepitone's triumphant Fringe return examines his country's (as well as his own inner) crumbling. Pepitone's darkly hilarious rants and soaring neurotic imaginings paint a man at war with himself and an empire gone mad with cruelty and self-absorption. Fun for the whole family! (Not really.) Eddie's been seen on Community, Arrested Development, Conan, Brooklyn Nine-Nine, Chappelle's Show, House MD, and Old School opposite Will Ferrell. His comedy is chronicled in the award-winning documentary The Bitter Buddha. 'A must-see for any committed stand-up fan' (Scotsman). 'Tour-de-force' (Chortle.co.uk). ***** (Skinny).

Eddie Pepitone makes his triumphant return to the Edinburgh Festival Fringe this August, with his brand new show RIP America, It's Been Fun at the Pleasance Courtyard from 30 July to 24 August.

Eddie Pepitone's eagerly anticipated return to the Fringe sees him examine his country's and his own inner crumbling. With his darkly hilarious rants and soaring neurotic imaginings, we see Eddie paint a man at war with himself and an empire gone mad with cruelty and self-absorption.

Eddie has appeared in many television shows across the pond including Arrested Development, Brooklyn Nine-Nine, Flight of the Conchords, The Sarah Silverman Program, Chappelle's Show, House M.D., Conan, Community, Weeds, Monk, ER, and It's Always Sunny in Philadelphia to name just a few.

He has also appeared in many feature films. These include the acclaimed comedy Old School opposite Will Ferrell and Vince Vaughn, the John C. Reilly / Sundance 2011 entry Terri, The Living Wake opposite Jesse Eisenberg, and the new indie drama Free Ride opposite Anna Paquin.