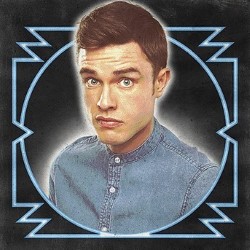 Gamble wops out his debut solo effort. Essentially it's a great guy (Ed) delivering funny humour through a pretty sweet microphone/speaker set up. You may have seen him as one of the idiot double act and iTunes chart toppers Peacock & Gamble, but this time it is just him (Gamble). He's supported Greg Davies on tour loads and he's been on Russell Howard's Good News (BBC Three) twice, so drop by if that's your bag. Star of Almost Royal (BBC America) and Chortle Award winner 2014. 'Incessantly hilarious' (Guardian). 'Moments of stupendous invention' **** (List).

Stand-up comedian Ed Gamble would love you to see his debut solo show Gambletron 5000 at Edinburgh Festival, but he realises that you are your own person and you make your own choices. Essentially he is asking you to consider joining him whilst he delivers some funny humour through a pretty sweet microphone/speaker set up.

Ed is currently starring in BBC America's highest rating show Almost Royal, a fast-paced and frequently funny (Variety) comedy series following two young British aristocrats on their first trip around the US, which will be broadcast on E4 this autumn. Other television appearances include; Man Down (Channel 4), performing on Russell Howard's Good News (BBC Three) twice, Dave's One Night Stand (Dave), Virtually Famous (E4) and Sweat the Small Stuff (BBC Three). On stage, Ed has supported Greg Davies on two national tours and Russell Kane on one and in 2014 won the Chortle Award for Best Compere.

As one half of Peacock & Gamble, Ed and his comedy partner Ray Peacock present the top rated show on Fubar radio, tackling big subjects ranging from goldfish to death and talking to celebrity guests including Al Murray, Johnny Vegas and the notorious porn star Ben Dover. The comedy duo also present, write and co-host the iTunes-topping Peacock & Gamble Podcast which has earned them two Chortle Award nominations, a place in the Guardian's top-ten comedy podcasts, and has seen them featured as part of the in-flight entertainment on British Airways. They starred in a short film, Warm Up, (BBC Comedy Online), have hosted The Comedy Club (BBC Radio 4 Extra) and have hosted and produced a Chortle sponsored daily podcast at the Edinburgh Festival Fringe since 2009 featuring comedy giants including Russell Howard, Lee Mack and Greg Davies.