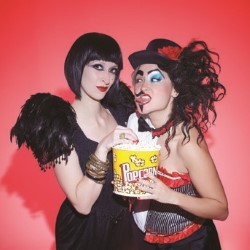 Bernadette and Victy are not dating. Not technically dating. But they do share a bed- and the cult musical comedy duo are ready to rip the sheets off and reveal their most bizarre, hilarious secrets ever. With an arsenal of cleverly naughty songs and the sharpest wit around, the deviant diva and half-moustachioed musician will seduce you with their uniquely filthy brand of comedy. 'A high-powered Flight of the Conchords dipped in acid and drenched in smut' (Crikey). 'Irresistible' (Guardian). ***** (Time Out). 'Gleefully filthy' ***** (Edinburgh Spotlight). 'Hysterical' ***** (SundayMail). 'Comic genius!' ***** (ThreeWeeks).

Deviant diva Bernie and half-moustachioed Victy are not technically dating - but they do share a bed. Now, for the first time, they are ready to rip the sheets off and reveal the bizarrely comic secrets of their cosy domestic situation.

Audiences all over the world have been seduced by EastEnd Cabaret's riotous comedy shows, which are bursting with salacious original songs and risqué material, and break all known boundaries of audience participation. But at the heart of the show is their hilarious and volatile relationship, as endearing as it is unsettling. Unashamedly filthy and blatantly funny, the duo is both a world-class example of modern cabaret and a satirical poke at the genre, in all of its East London-bedsit-living, gin-drinking, promiscuous glory.

On the back of a successful Australian Festival tour, EastEnd Cabaret received 5-star reviews and sold-out shows at the Adelaide Fringe and Fringe World in Perth, and at The Famous Spiegeltent for the Melbourne International Comedy Festival, where they also headlined Comedy Up Late for ABC2 TV. The award-winning duo were named 'Best Cabaret' act at Adelaide Fringe 2012 and have received nominations for the TO&ST award and Perth Festival's 'Best Show'. Following a sell-out run at the Soho Theatre, EastEnd Cabaret were also named one of the "most original and influential people working in the UK creative industries" as part of the Hospital Club 100.