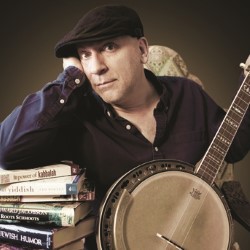 Featuring feuding tailors, a Jewess who joins a 1950s Christian cult, a cocaine-addicted rabbi and many more, this award-winning and ever-evolving Fringe favourite is a joyous and hilarious collection of stories-in-song, written and performed by a master songwriter. A rich tapestry of family legend and musical folklore to make you both laugh and cry in a heartbeat. 'An extraordinary performer. His songs are at times heartbreakingly poignant, at other times laugh out loud funny. Utterly charming, thoroughly recommended.' (Edinburgh Festivals Magazine).'Genius' ***** (ThreeWeeks). 'Lovingly detailed' **** (Time Out).

Daniel Cainer returns to Edinburgh Fringe in 2014 with a re-tuned show featuring feuding tailors, a Jewess in a 1950’s Christian cult, a cocaine-addicted Rabbi and many more!

This hilarious Fringe favourite performs a joyous and ever-evolving collection of stories-in-song. Throughout the hour Caine weaves a rich tapestry of family legend and musical folklore to make you laugh and cry in a heartbeat

Daniel has composed music for documentaries and dramas for all major UK networks, he’s produced and played music at Abbey Road and other major studios with lots of top artistes and he’s written and performed weekly topical songs on LBC, Carlton (remember them) TV and BBC national and local radio. His melodies have launched a thousand cars (well one actually) and a quite a number of white goods.

His infamous musical produced with Craig Revel Horwood is still talked about (at least by him and Craig) and now as creator and performer of an award winning one-man show of stories in song about Jewish culture he has found a unique voice.