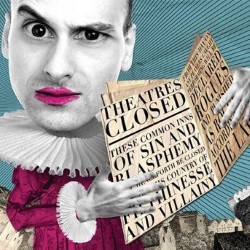 England, 1649: the King has lost his head; the Queen has fled; the Globe Theatre has been demolished and all productions are banned. Developed at the Other Place at the Royal Shakespeare Company, this rakish new comedy from Fringe First winner, Tim Norton, follows three foolhardy actors in their attempts to keep one step ahead of Puritan forces, dressed only in the petticoats and farthingales of their last performance. 'An absolute hit' (BritishTheatreGuide.info). 'Utterly fantastic' (FringeReview.co.uk). 'Unadulterated, joyful fun' (RemoteGoat.com).