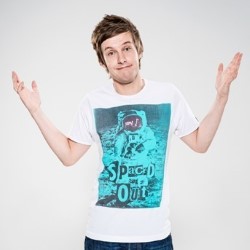 Following a sell-out tour, Celebrity Juice regular and star of BBC2's Hebburn comes to Edinburgh for nine nights only! After being 'sent off' the Soccer AM sofa last year for misbehaving, Chris wonders whether he really is The Most dangerous Man On Saturday morning TV. Find out what happens when you say the wrong thing in the wrong place at the wrong time. 'A mainstream hit, a cult favourite or almost anything in-between' (Sunday Times). 'Frighteningly talented ... tearing up every stage he lands on' (GQ).

Following his fringe run, Chris will extend his nationwide tour by a further 35 dates into the autumn. Tickets are available to buy from www.chrisramseycomedy.com.

After being thrown off Soccer AM (Sky) for what he thought was an innocuous comment, Chris Ramsey started to wonder whether he might actually be 'the most dangerous man on Saturday morning television'. He discovers what happens when you say the wrong thing in the wrong place at the wrong time.

Last year Chris Ramsey starred as Jack in the second series of critically-acclaimed sitcom Hebburn, co-starring Vic Reeves on BBC Two which peaked at over 2 million viewers. Chris piloted his own show for the BBC with Avalon Television about the world of social media and now has over 278,000 followers on Twitter. He has appeared on Never Mind the Buzzcocks, Mock the Week (both BBC Two), Celebrity Mastermind (BBC One), 8 Out of 10 Cats (Channel 4) and is a regular on Celebrity Juice (ITV2) and Virtually Famous (E4).