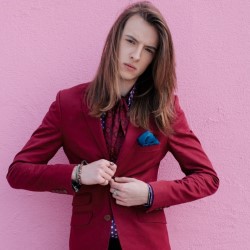 Much like a comedian, only more hilarious, Charlie O'Connor promises laughter, confusion, merriment, and pungent hair envy in his sparkledragon of a show. Combining live music, live comedy, and live humans he weaves the strange and wonderful into his first ever hour of full blown Charlie humour. So hold onto your cravats. Charlie finds it hard to describe his style through such a mainstream medium like words but nevertheless offers a few to capture his true essence: good, nice, not racist.

Directed by Lee Hupfield (Balls of Steel, Kevin Bishop Show, Star Stories and Betty White's Off Their Rockers), Dandyisms sees Charlie weave his highly physical style of comedy, with music, story telling and plain silliness along with his natural charm to create an elegant hour of funnies. Promising laughter, confusion, elation and of course... hair envy, this show is not to be missed!

Whilst studying in Los Angeles over the past four years, Charlie has been moving his way up the LA stand-up and improv scene. He has been honing his comedy skills like a humorous ninja, performing at various venues across the City of Angels, and winning a competition to find the funniest student in LA, The Laugh Factory's Bowl ll Championship. So hold on to your cravats as now he triumphantly returns home to the UK to debut his first hour of full-blown Charlie humour.