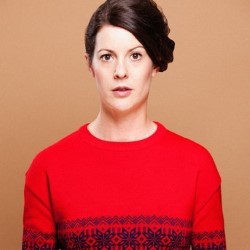 Good afternoon! I am a character comedian doing a comedy show. I have been in BBC Radio 4's 2525 and Mission Improbable, and on BBC1's Not Going Out, plus an advert for car rental. Some people have written nice things about me but why not come and see for yourself? 'Dazzling comedy ... as good as Joyce Grenfell already, if not better' (Spectator). 'One of the UK's best' ***** (TheNewCurrent.co.uk). 'A peerless character show' **** (List). **** (BroadwayBaby.com). 'Left me breathless' **** (EdinburghFestivals.co.uk). **** (Festival Journal). 'Endlessly entertaining' **** (Chortle.co.uk).

Catriona Knox is a prolific comedy writer/performer and a talented actress. With frequent live comedy performances in London and further afield, Catriona regularly showcases her talent for character comedy, both as a writer and performer, at venues including the Shaftesbury Theatre, Soho Theatre and Leicester Square Theatre in London's West End.

Catriona is also one third of the all-female sketch group The Boom Jennies who have performed 6 times at the Edinburgh Fringe Festival to critical acclaim. Her broadcast credits include BBC1's Not Going Out, BBC Bitesize Shakespeare, Radio 4's Strap In! It's Clever Peter!, the Boom Jennies Radio 4 series Mission Improbable and Sketchorama. She is also starring in 2525, a brand new sketch show on BBC Radio 4 set in the future, produced and created by Matt Lucas and Ashley Blaker. Catriona also has her own solo project in development for Radio 4.