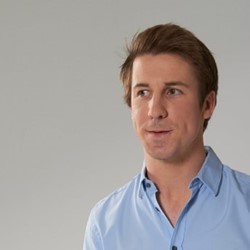 Uniquely stubborn, outright impractical and undeniably hilarious. Geordie comic Carl Hutchinson returns to the Fringe fresh from touring the country supporting Chris Ramsey with another brilliant hour of stand-up. An old man in a young man's body, he possesses the uncanny ability to both irritate and be irritated in a charming and endearing manner. Described as 'the Larry David of the north-east' (LondonIsFunny.com), Carl's energetic, articulate and dynamic performance makes this his best show yet. 'The comedic catalyst to a good night out' ***** (Three Weeks).

Amused Moose Best Show Nominee 2012 Carl Hutchinson is an unashamedly grouchy young man. He's made a special effort to be more patient towards people and their situations but he just possesses an uncanny ability to irritate, and to be irritated. Here's Me Show follows Carl on his journey returning to the North East, recounting stories of buying a house and naked war veterans along the way in his own brand of uniquely stubborn, outright impractical and undeniably hilarious humour. Carl's energetic, articulate and dynamic performance makes this his third hour of stand-up at the fringe the best show yet.

Last year Carl opened for wrestling legend-turned-stand-up Mick Foley at various dates around the UK and he has been a special guest of Chris Ramsey on his last two UK tours.