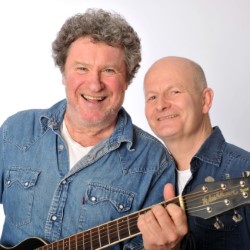 After their hit dad-rock album Dark Side of the Moob, Rory and Philip return to Edinburgh with an hour of sophisticated comedy and song. Expect wit, elegance and clever musical pastiche (but don't worry, there's also silliness and filth). This is the show where music and comedy meet, have a few drinks, fight, then stagger home singing hits from the 60s. Something to offend everybody. 'One of the cleverest shows at the Fringe in years' (Edinburgh Reporter).