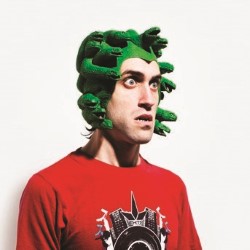 Travelling at the speed of thought in his brand new music production spaceship, the world class multi-award-winning musician and comedian, transcends mere mimicry to produce studio quality compositions faster than most could imagine them. The vocal shaman emits and manipulates any conceivable sound with a manic wit that will have you rocking with laughter and shaking your tail feather as a whole album is created live within an hour, based on your suggestions. 'Breathtakingly talented' (Time Out). 'Brilliant...hugely accomplished' (Sunday Times). 'A genius at live improv performance...with quick-fire wit' (Uncut).

After a hugely successful sell out show last year, the award-winning, multi-talented Beardyman, returns to the Edinburgh Festival Fringe for a limited run with his critically acclaimed show One Album Per Hour at the Pleasance Grand from the 15-17 August.

The vocal shaman will emit and manipulate any conceivable sound with a manic wit that will have you rocking with laughter as a whole album is created live within an hour, based on your suggestions.

Travelling at the speed of thought in his brand new music production spaceship, the world class multi award-winning beat-boxing phenomenon, blows your mind and brings you to your feet with his incredible ability to produce studio quality compositions faster than most could imagine them, with the help of the Beardytron_5000mkII.

For the past year he has been working with feverish perseverance, with some of the best minds in the world of music technology on one of the most ambitious and technically demanding projects ever undertaken by a performing artist. The culmination of years of research, design and development, the Beardytron_5000mkII has been a closely guarded secret until now, and with good reason. It is insane. It can do things literally nothing else can, and with this new system, Beardyman is finally free from the trappings of other people's technology.

Beardyman has won fans ranging from Fatboy Slim to Herbie Hancock and Jack Black to Matt Groening. He won the UK Beatbox championships consecutively until nobody else dared to enter. Mike Judge was so impressed with his vocal abilities he personally insisted that Beardyman lent his voice to several characters on the latest series of Beavis and Butthead. He was granted his own show at the prestigious Montreal Comedy Festival, appeared on Conan (TBS) and stole the show at the BBC Comedy Proms at the Royal Albert Hall.

Now One Album Per Hour sees Beardyman at his most unique, interacting with the audience to a level that few dare and especially in the territory where credible music meets rip roaring comedy. It's up to you what happens and how the album takes shape, as you'll see from these two clips of a One Album Per Hour test show in Bristol, where the fate of a Panda's allergies and Justin Bieber's music are left to the audience's direction and Beardyman's execution, literally...