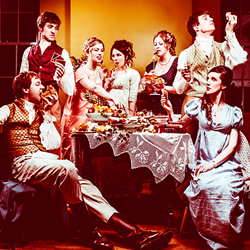 Austentatious are back for a third glorious year! Each day, an all-star cast improvise a brand new Austen work before your astonished eyes, based on audience suggestions (previous works include Strictly Come Darcy, Mansfield Shark). Full of swooning bonnets, stolen looks and dashing gents, Austentatious is not to be missed: fresh, hilarious and entirely unique comedy. Book now to avoid disappointment! 'One of the most enjoyable 60 minutes on the Fringe' **** (Guardian). 'Constant wit and verve' **** (Times). 'Supersmart, terrifically funny' **** (Scotsman). 'Highly impressive ... they're all hugely talented performers' (Time Out).

After two total sell-out Edinburgh runs, award-winning improvised comedy show Austentatious: An Improvised Novel is heading to The Pleasance - on the 200th anniversary of Mansfield Park, no less.

Winner of the Best Character, Improv or Sketch award at the 2014 Chortle Awards, Austentatious: An Improvised Novel is a comedy play spun in the inimitable style of Jane Austen - and all 100% improvised.

The show hinges on a deceptively simple idea: audiences are asked to place imaginary titles of an Austen novel into a hat, one of which is selected at random and immediately turned into an hour-long improvised performance.

Performed in period costume with live cello accompaniment, Austentatious is an immersive and hilarious treat for fans of Austen and improvised comedy alike.

Austentatious have had their most successful year yet - a 20+ date tour of the UK, a pair of sell-out shows at the Udderbelly South Bank, appearances on ]BBC Radio 2 and BBC Radio 4 Extra, and a sell-out residency at London's Leicester Square Theatre.

Rather than the familiar roster of impro games and scenes, Austentatious presents an ambitious story with all the trappings of Austen's best work: rounded characters, delicate plotting, and real drama. Whether it's 'Northanger Rabbi', 'Pride And Predator' or 'Strictly Come Darcy', no two shows are ever the same.